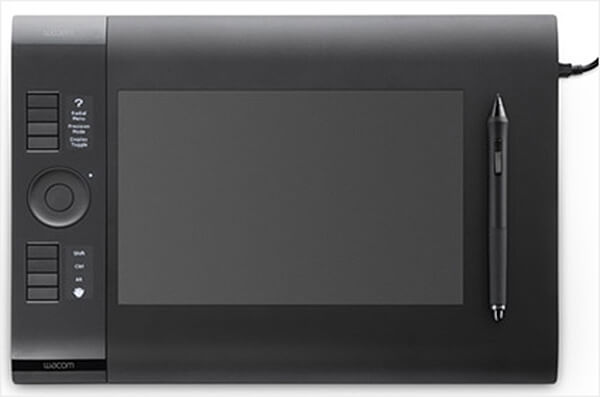 Before acquiring the Wacom Intuos4 I had a cheaper Wacom Volito2 which had 512 pressure levels, by contrast the Intuos4 has 2048 levels of pressure and also has tilt sensitivity which is achieved by using EMR (Electro Magnetic Resonance) technology in the Wacom pen. While I quite liked the Volito2 at the same time I found it a bit unnatural to use and it ended up gathering dust by the side of my keyboard.

Initially I had the same issues with the Intuous4, it just felt unnatural and cumbersome to me but I decided to force myself to use it. I’m pleased to say that now it feels much more natural and a joy to use in photoshop – I don’t use it as a mouse replacement (yet) as some do but for fine editing in photoshop – cloning and mask creation, what I love is the pressure sensitivity giving fine control over the size of the the clone/healing tool, making fine editing much easier and more accurate than using a mouse.

I like very much the OLED displays next to the express keys/short-cut keys. The keys can be programmed to do what you’d like with the ability to give them a name that shows up next to the buttons. This  makes the tablet extreemly powerful as just a short-cut device, especially as these can be programmed to change depending on which application you are using. The wheel is also excellent and has four different modes that again can be programmed to your liking, I use it for zoom and brush size but also in Photoshop CS4 it can be used to rotate the canvas, this is great for adjusting the canvas position to your more natural drawing angle, much as you would do with paper.

Wacom have obviously thought the design of this product through very carefully, if you are left handed you can simply turn the unit 180 degrees and through a setting in the Tablet Properties the OLED displays flip so you don’t have to read them upside down. Also the USB cable, that also powers the device, can be plugged in either side, a truly ambidextrous design.

The Wacom Intuos4 comes with loads of different nibs for different feels that are stored in the pen holder, which means you are unlikely to loose them. I feel I should mention some negative aspects of the device but I’m struggling to find any, I am very impressed with Wacom Intuos4 and now find myself lusting after a Cintiq.